IFRS 17 Insurance Contracts is published by the International Accounting Standards Board (IASB) in May 2017. In November 2018, the IASB decided to postpone the effective date with 1 year, from 1 January 2021 to 1 January 2022. Insurers had been lobbying for postponement as the initial time frame was considered very tight for proper implementation. Also questions have been raised on some aspects of the Standard, potentially leading to some changes in the near future. The most challenging subjects are related to methologies embedded in the Standard as well as operational implications and the transition to IFRS 17. Some of these challenges could be avoided if the Standard would allow an alternative, conceptually equivalent approach for the CSM.

The market-consistent valuation of Insurance liabilities is an essential element, not only for IFRS 17, but also for example for Solvency II and Market Consistent Embedded Value (MCEV). The latter reporting metric was introduced by the CFO Forum in 2008 and has been used for many years to value Insurance companies based on shareholder cash flows, broadly comprising of market consistent value of profits plus surplus capital. A very important difference between Solvency II and MCEV is that insurers commonly used an indirect distributable earnings approach for MCEV, while Solvency II valuations are in principle based on a direct balance sheet approach. The IFRS 17 Standard conceptually alings with Solvency II methodologies. However, one important difference is that on the IFRS 17 balance sheet the expected future earnings are reserved for by means of the Contractual Service Margin (CSM), while on the Solvency II balance sheet future earnings are materialized in Own Funds. The CSM, calibrated assuring nil profit at point of sale of a contract, is put on the balance sheet and is then run off over the lifetime of the contract. This CSM is the link between IFRS 17 and MCEV, as the CSM had conceptual similarities with the Value-in-Force (ViF) as a component of MCEV.

However, there are fundamental differences between the IFRS 17 CSM and the MCEV ViF. The ViF as used under MCEV is based on an actuarial stand-alone calculation using currend economic and non-economic assumptions. In contrast, the IFRS 17 Standard prescribes the CSM as at end of period to be calculated as the CSM at start of period, adjusted for all applicable mutations, such as interest accrual based on the locked in (forward) interst rates and assumption changes. Recognition of part of the CSM is the last step in the movement of the CSM, which is recognized as Insurance revenu in the IFRS 17 P&L. This recognition is based on the amount of coverage units provided in the period in relation to the remaining coverage units of the contract. This approach effectively ensures smooth profit release over the lifetime of the contract as the service is provided. In summary, IFRS 17 requires a retrospective approach for the CSM, or equivalently, prohibits a prospective stand-alone calculation of CSM as at end of period like MCEV ViF.

In fact, this aspect of the CSM is the source of some major IFRS 17 implementation challenges. The retrospective approach leads to extra data requirements as well as operational complexities. For proper CSM accounting Insurance portfolios should be grouped in cohorts referred to as ‘units of account’. Splits in portfolios should made based on types or risk, embedded options, Reinsurance and issue year (not more than 1 year apart). CSMs and loss components should be tracked and stored at least on this lowest level of units of account. Furthermore, the concept of coverage units, which is an important determinant of recognizable profit for groups with positive CSMs, is a new concept with many possible implementation options. Last, the CSM at transition date should, if not impracticable, be based on a full retrospective approach, requiring a simulation of history as if IFRS 17 has been applicable from the start of the Insurance portfolios. It is expected insurers will be faced with difficulties how to deal with, for example, evolution of historical best estimate assumptions, system migrations and data availability. Although this can be avoided by applying the fair value approach if the full retrospective approach is deemed impracticable, effectively insurers cannot determine balance sheet Insurance liabilities without knowing the Insurance liabilities at previous periods, and for transitions, even for the complete history of the portfolios.

Would a prospective approach be an alternative?

Beneftis of prospective approach of IFRS 17

Calculating the CSM based on such as prospective actuarial future distributable earnings valuation would have significant benefits. Some previously mentioned complex IFRS 17 requirements would be avoided. As balance sheet liabilities can be calculated on a stand-alone actuarial prospective valuation, a retrospective approach for calculating CSM at a certain point in time, as well as for transition, is not needed. Furtermore, defining coverage units which determines release of profit with a certain degree of arbitrariness is also avoided. The only histroic information needed is the locked-in discount rate for the CSM within the GM. The exiting actuarial systems currently used for MCEV and Solvency II purposes usually have all the attributes needed to project and discount future best estimate cash flows as well as future distributable earnings. It would therefore make sense to have all CSM calculations together in once process. This has the added benefits of consistency between the underlying cash flows for both metrics and reducing time and effort attempting for reconcile differences. As a result, allowing a ViF approach for CSM would encourage insurers to focues on steamlining existing reporting processes and actuarial models, for example with movement analysis and interaction with general ledger systems. This would also benefits Solvency II reporting timelines and analysis.

The ViF approach for the GM is illustrated with an example contract with the following characteristics and assumptions:

This set of assumptions gives an IFRS 17-based new business margin of 5%. In this example it is assumed the policy envolves following best estimate assumptions and future yield curves follow forward curves. Furthermore, a risk adjustment of € 100,- is assumed. The opening balance sheets and yield curves are as follows. 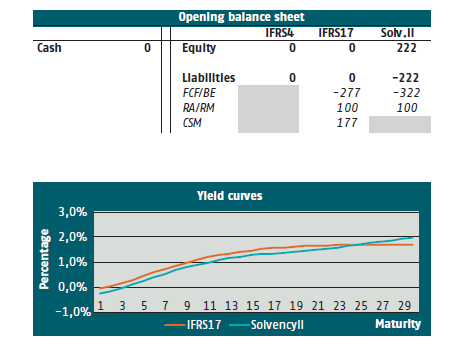 The opening balance sheet shows that on IFRS 17 basis the CSM represents future profits and ensures initial equity is zero, whereas on Solvencu II basis future profits are directly materialized in equity. At initial recognition, the CSM is equivalent with a new business ViF. For subsequent measurement, CSM should be amortized according to coverage units, which differs from a ViF approach.

The following graph shows a comparison between release of the CSM based on coverage units and based on a ViF approach. Coverage units in this example are based on insured amounts, which gives a smooth release pattern (1/30th for the first year, 1/29th for the second year, etcetera). For the ViF approach, two variants are shown. The first method is based on actuarial forward rates from the yield curve. For the second variant, at initial recognition the curve is translated into a flat yield which gives the same CSM. This flat yield is used to calculate the CSM for subsequent measurement. 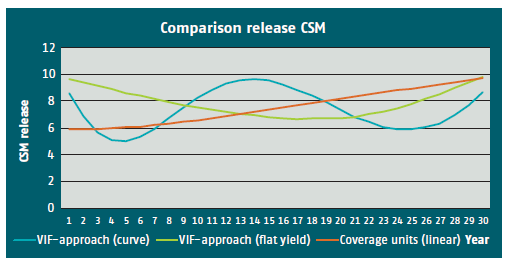 The CSM release following coverage units increases in time due the interest accretion on the CSM. The ViF approach based on the forwards from the yield curve gives a CSM release pattern strongly dependent on the shape of the curve. When applying a flat yield, this volatility in CSM release caused by interest results is smoothed. Compared to the coverage units method which distributes profits evenly over the coverage period, the ViF approach with a flat yield ensures profits emerge following actuarially expected results. In the first years expected result on expenses is predominant, in the later years this is result on mortality. Therefore, the ViF method leads to profit emerge which is more aligned with the amount of risk in the contract.

The IFRS 17 requirement of retrospective calculation of CSM gives insurers some significant methodological and operational challenges. Profits should be released following coverage units to be defined by the insurer, which is a non-trivial aspect with significant impact on P&L results. The retrospective approach for transition is also a burdensome exercise. However, the CSM has similarities with the Value-in-Force (ViF) which is a known metric under MCEV reporting. Using appropriate assumption settings, a prospective actuarial ViF approach can be an adequate alternative to the retrospective IFRS 17 CSM aproach. Besides alignment with existing projection systems and reporting processes, data requirements are less significant, transition is more straightforward and profits are released more aligned with the amount of risk in the contract. Allowance of a ViF approach for CSM would enable insurers to put more effort in enchancement of existing reporting processes and actuarial models, which would also be beneficial for Solvency II reporting processes.

This article is published previously in ‘ Actuaris’  in April 2019

Do you want to cooperate with Triple A?

Do our themes appeal to you and is our culture exactly what you are looking for? Take a look at our vacancies. We are always looking for talent!

This publication is part of the following themes